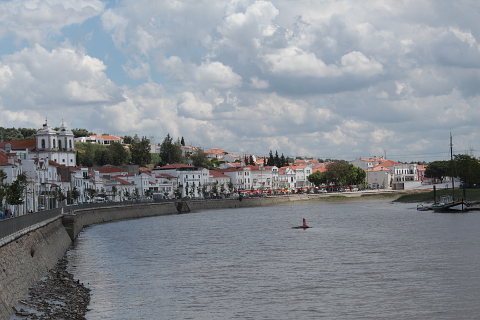 Alcacer-do-Sal is a pretty town on the edge of the river Sado. It is about a one hour drive south of Lisbon and a nice place to stop on a drive between Lisbon and the Algarve.

Alcacer do Sal spreads out along the edge of the river Sado and the pleasant promenade along the rivers includes various shops and restaurants. 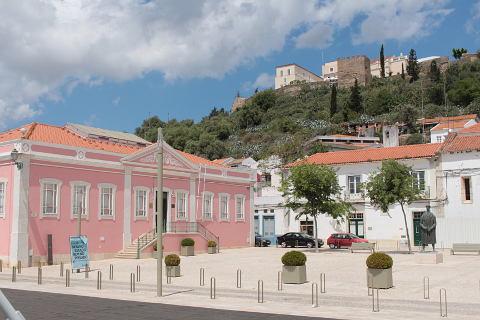 Above the town is a Moorish castle for which the town is named, al qasr means the castle. Sal refers to the salt which has been an important industry here

The castle has been renovated and has some walls and towers you can walk on and part has been turned into a hotel. You get good views from up here and under the castle is a little museum with an archaeological tour.

Also on top of the hill is a 13th century church, the Santa Maria do Castelo church, built after the reconquest on the site of a Pagan temple. 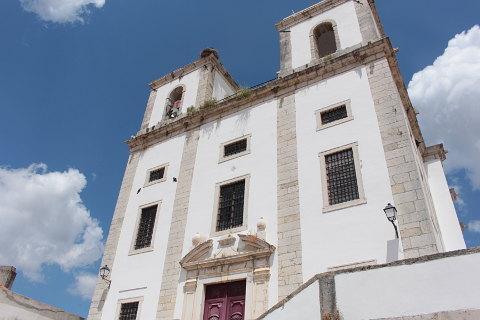 The main church in the town is the Igreja do Espirito Santo. King Manuel is believed to have married his second wife here and inside is an unusual font in the shape of a crown.

There are two more religious buildings of note. One is the church of Santiago which has pictures made out of blue tiles depicting the lives of the saints. The other is the 16th century convent of Santo Antonio whose Chapel of the Eleven Thousand Virgins is a notable Renaissance building.

The Sado Estuary wetlands area is a haven for birds and merits a visit.

Drive along the southern part of the estuary to Carrasqueira and there is a traditional and very picturesque fishing quay.

Alcacer do Sal is only an hours drive from the lovely capital city of Lisbon with its large castle and beautiful buildings.

Near to Lisbon is the UNESCO World Heritage town of Sintra with its Pena Palace and much more to see.

The drive from Lisbon to the Algarve along the A2 leads you past both Alcacer do Sal and the pretty town of Almodovar. Along the way is some lovely scenery especially south of Almodovar.

Photos of Alcacer do Sal

Map of Alcacer do Sal and places to visit

Alcacer do Sal places to visit

See more places nearby in the Alentejo guide