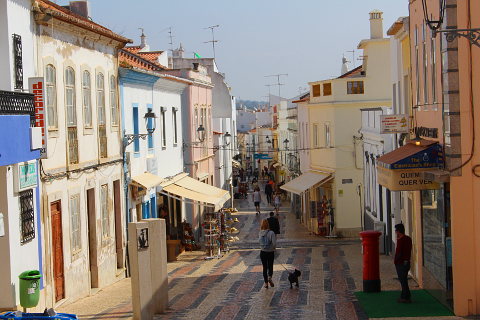 One of the most popular destinations in the Algarve region of Portugal is the city of Lagos.  Lagos lies at the mouth of the Bansafrim River on the Atlantic Ocean. It is situated between Portimao to the east and the southern tip of Portugal, Sagres, to the west.

The fortified walls and cobbled streets of Lagos attest to a history dating back to the 14th century.

Lagos is a charming town and makes an ideal base for exploring the western side of the Algarve. Its pretty white houses often have the door and window surrounds painted in bright colours as is common in Portugal and here and there are houses and shops covered in tiles. 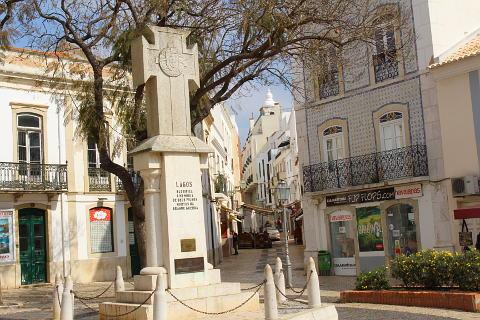 Lagos is much quieter than Albufeira and Vilamoura to the west which are packed with British holiday makers even in April. In summer Lagos too is busy but Lagos retains a more Portugese ambience.

It is a small town but it is very pleasant to explore its quaint pretty streets or take a walk around the defensive walls that surround the old centre.

Because of a devastating earthquake and tsunami in 1755, many parts of the town, with its ancient architecture, were reduced to rubble. However, there are still several historic sites  to visit.

The defensive walls date back to the 16th century along with the Fort of Ponta da Bandeira. You can visit the fort for a small fee and see its small chapel and get some good photos from its walls. Near to this is a watch tower and a castle of Arab construction.

Close by the square of the Praca Infante Dom Henrique has a statue of Prince Henry and the church of Santa Maria. Opposite the church is an interesting corner which was once a slave market. The Mercado de Escravos is believed to be the first black slave market in Europe. It opened in 1444, and was the entrance point for many of the African slaves into Europe.

The "golden" church of Saint Anthony was destroyed in the earthquake but rebuilt in its original style. It can be entered via the attached museum and both are worth a visit. 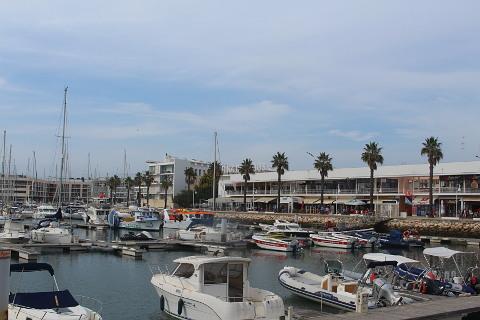 Lagos developed as a fishing town and later became an important staging area for ships that were sailing west towards the New World during Portugal’s “Age of Discoveries”. Nowadays it has a pretty marina full of small yachts and boats and along its edge are a few restaurants and bars which provide an alternative to those scattered throughout the old town.

Next to the Marina is the fishing port and because of this fish and especially sardines is always a popular choice in the restaurants of Lagos.

One of the top beaches of the Algarve is located very close to Lagos historic centre this is the Praia Dona Ana which has the lovely red-gold cliffs of the area and a number of rocky islands to make the beach particularly interesting. 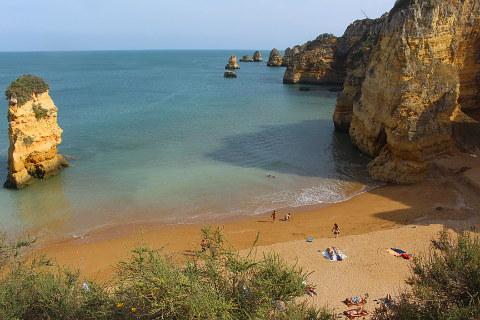 Almost as pretty is Praia do Pinhao which is even closer to town and Praia do Camilo which is the other side of Dona Ana Beach. The closes beach is Praia da Batata which is a good sandy beach but does not have the beautiful rock formations of Pinhao, Dona Ana and Camilo.

There is a walking trail that starts at the end of The Avenida das Communidades Portugesas and goes round the cliff tops past these beaches to the lighthouse and the Ponta da Piedade and round to the beaches of the other side of the small peninsula next to Lagos. This takes about half an hour to get to Ponta da Piedade.

Ponta de Piedade is perhaps the highlight of the beaches of Lagos and has some simply stunning rock formations falling in to the ocean. Kayaking is a lovely way to see them or alternatively take one of the boattrips advertised along the marina and harbour of Lagos centre.

Trips and Activities from Lagos

As well as its beautiful beaches Lagos has various activities that you can sign up for. These include dolphin watching, diving, snorkeling, stand-up paddle surfing (SUP), kayaking, ballooning and lots of boat trips to get a sea view of the beaches and cliffs of this gorgeous stretch of coast.

Lovely as Dona Ana beach is you will surely wish to visit the iconic beach of Praia da Marinha to the west. This is considered to be one of the top 10 beaches in Europe. Whilst at Marinha beach be sure to take the boat trip to Benagil caves, a highlight of a trip to the Algarve.

Map of Lagos and places to visit

See more places nearby in the Algarve guide