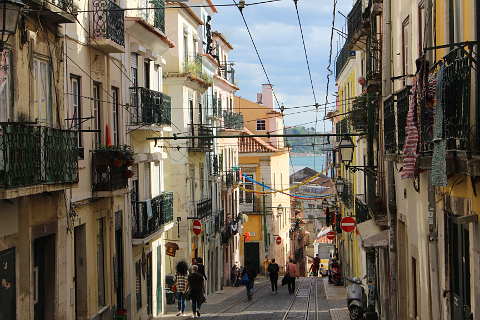 You will probably first head for the wide open boulevards and beautiful squares of the Baixa area of Lisbon and the old town in the Alfama district with its castle and cathedral. See our guide to these areas. However the quintessential Lisbon is best found in the surrounding districts.

Discover the most popular districts of Lisbon

This is the trendiest area of Lisbon. Its great for shopping, drinks and food and general people watching. Elegant buildings and wide open streets and squares characterise the area.

Largely built in the 1700s these streets have always been popular with Lisbon's intellectual and artistic crowd and it is home to various theatres and art galleries. The Sao Carlos National Theatre has beautiful ornate decorations and the Chiado museum has a great contemporary art collection.

You will notice the dramatic look of the Carmo church which has been left relatively unrestored after a large fire in the area in 1988. It touched a lot of the district but other buildings have been restored to their former glory. 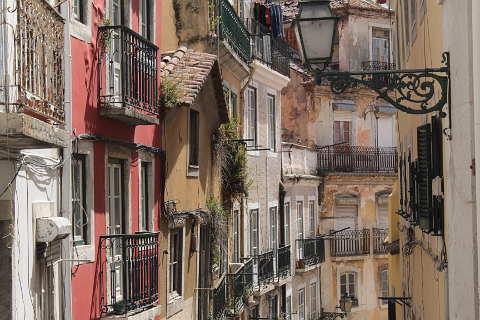 Bairro Alto is one of the most atmospheric parts of Lisbon. Its tall houses and narrow streets climb upwards as the area is on one of the seven hills. The houses are often painted in prettty colours though the area still looks slightly neglected compared to other parts of Lisbon.

During the day the streets are quiet and sleepy however by night this area comes alive. Many residents and tourists come here in the evening for the bars, the restaurants and the Fado houses. Fado is the soulful music for which Lisbon is famous. A singer and a guitarist produce haunting melodies and in the Fado houses you can often have a meal as you listen to the music.

The Gloria funicular is in the Bairro Alto and takes you from Restauradores Square up to the viewpoint of Miradouro de Sao Pedro de Alcantara.

Belem is a neighbourhood to the west of the main city and you will need to take a train or bus to get there. There are two main sights at Belem, one is the unusual Belem tower the 'Torre de Belem' and the other is an incredible monastery, 'the Mosteiro dos Jeronimos. Both are UNESCO World Heritage Sights. 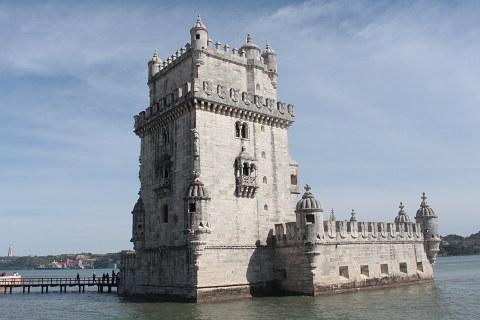 This district is linked to the Age of Discovery when Portugal was a major sea faring nation and expeditions were going out to India, Japan, Brazil etc. The Belem tower and the Jeronimos Monestery are both built in the Manueline style and decorated with exotic motifs of faraway lands.

The Belem Tower was built in the 16th century to guard the entrance by sea to the city. Its syle has both Venetian and Moorish influences and it is one of the iconic sights of Lisbon.

Nearby on the other side of the road is the Jeronimos Monestery. This is one of the most famous and impressive sites in Lisbon, was built in the 15th century and took nearly 50 years to complete.The monastery was built on the site of Vasco da Gama's last night in Portugal before setting out on his successful voyage to India. The tomb of Vasco da Gama is inside by the entrance. The tombs of many other eminent Portugese lay here too including kings and poets.

It is built in the European Gothic style and more specifically in Manueline style which means it was designed to celebrate the great discoveries of the time.

Nearby the Discoveries Monument is a statue of some of the great explorers.

Belem is also home to the original bakery producing the Belem pastries (Pasteis de Belem), a sort of custard tart, which are famous throughout Portugal. The Belem bakery is still open and still said to be the best. Expect a queue to buy them here!

Belem is also home to some of Lisbon's best museums including: the coaches museum with displays of Royal coaches; The Berardo museum of modern and contemporary art houses pieces from Dali, Picasso, Andy Warhol, Duchamp, Magritte and many more; and MAAT, Museum of Art, Architecture and Technology.

The neighbouring district of Ajuda is home to the and the Royal Palace with its lovely Botanic Garden.

If you are looking for something completely different then head to the Parque das Nacoes district. This area was revamped for the 1998 World Exhibition and has further developed since then into a remarkable area of modern architecture.

Particularly to look out for is one of the biggest Aquariums in Europe, Oceanario, a fabulous train station, the Oriente station designed by Santiago Calatrava and with a glass and steel structure shaped like a tree. The Pavilhao de Portugal with an amazing undulating roof is another must see as is the Torre Casco da Gama with its observation tower. This is a great place to view the Ponte Vasco de Gama - Europe's longest bridge.

Another Lisbon highlight is the Jardim Zoologico, which contains an enormous collection of animals from all over the world. The zoo’s highlight is their aquatic animal collection, featuring dolphins and sea lions. The zoo is home to more than 2,000 animals, representing 360 species.

A great way to escape the hustle and bustle of Lisbon is to visit the Lisbon Botanical Garden in the Rato district, which is the oldest garden in Portugal. Its 10 acres are home to over 18,000 plant species, all of which are labeled.

Map of Lisbon districts and places to visit