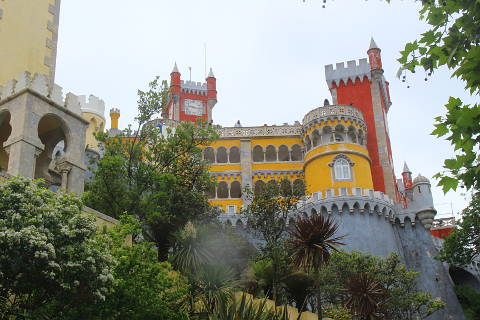 The Park and Palace of Pena lie at the top end of the village of Sintra about 30 kilometers from Lisbon. It is easily reachable on a day trip from Lisbon either in the car or on a bus.

The size and bright colours of the Pena Palace along with its distinctly Moorish look make first sighting of the castle an unforgettable experience. It was built during the Romantic period of architecture in the 19th century and lived in by the Portugese Royal family on various occasions until 1910 when the Royal family was replaced by a Republic in Portugal.

The palace sits high on a hill and has lots of courtyards, walls and battlements to explore. As the palace is made up of different buildings linked by square turrets, round turrets, buildings with flat roofs, buildings with domed roofs and even a turret with an onion shaped roof, not to mention the reds, yellows and greyish tile of the buildings each new view is quite different to the last. 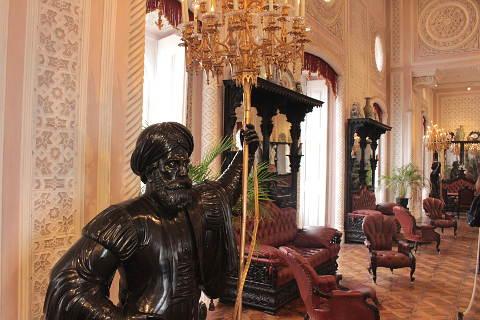 Walking around the exterior gives you views over all the different aspects of the palace and close up views of the detail of the tiles, arches, windows and intricate sculpted detais of some balconies and turrets. It also gives you fabulous views out over the huge park that surrounds the palace and to the countryside  beyond.

You can pay for an exterior visit only or alternatively you can go inside to admire the sumptuous decor inside. Beautiful tile work is very much in evidence and beautiful windows and ceilings.

The rooms you can see include the kitchen with an array of utensils from the epoch when they would have been used for royal banquets. There is also the former office of King Carlos I, a salon, dining room and various bedrooms.

Many of these are in the part of the palace that was originally a monastery in the 16th century and each room was once a monks cell or for the larger rooms, two monks cells converted to one room.

There is also a chapel that too originated with the monastery. 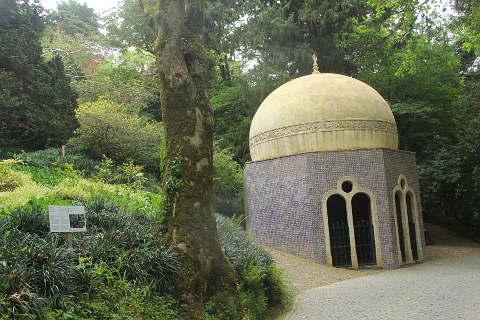 When you have had a good look round there is a nice roof top terrace with a restaurant where you can go for refreshments.

The Pena Palace is set in 85 hectares of grounds which include many paths. As you explore you can discover the Islamic stylet pavillion, the Chalet of the Countess of Edla, the stables, lakes, an English garden and lots more.

To thoroughly explore the palace and its park you really do need a full day however there is much to see in Sintra and if you only have one day you will need to make do with a short walk through the park.

The park and palace of Pena are a UNESCO listed World Heritage Site along with various other monuments of Sintra which are a testemony to the Romantic architectural style so prevalent in the town.

There is much to discove in Sintra including the Chateau des Maures and the Monserrate Palace. The Gothic Manor house called the Quinta da Regaleira is also very popular especially for its gardens and huge well.

Map of Pena Palace and places to visit