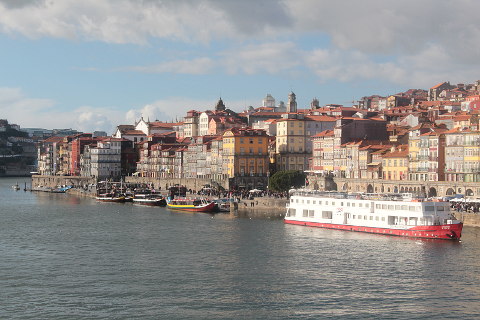 As the capital and gateway to the northern part of Portugal, the city of Porto (also known as Oporto), is the second largest city in Portugal. It lies at the mouth of the Douro River. It is home to past and present day architecture, with styles including Roman, Gothic, and Renaissance.

In 2001, this city was chosen as the European Capital of Culture. In addition, UNESCO has recently cited the historic center of the city as a World Heritage Site. Porto also sits on the 'Portugese Way' path of the 'Camino de Santiago' pilgrim route. Porto is also the area where one of the best-known wines comes from: Port wine. The best way to become one with Porto is to take a walking tour throughout the city.

Fifteen years ago Porto was neglected and falling into ruin, what a contrast to the current lively and atmospheric town that is capturing the heart of the many tourists who are now discovering Porto. Budget airlines are opening more and more routes to Porto and it has three times recently been voted Europe's best destination. On a recent visit (2019) we discovered it is just perfect for a weekend break - even in January.

The highlight of a trip to Porto is the fabulous Ribeira district. Beautiful tall houses line the banks of the river Duomo and bars and restaurants spill out onto the busy waterfront area. The houses are decorated with a mixture of coloured tiles and painted facades and a long stretch of arcades which are also home to shops and bars. 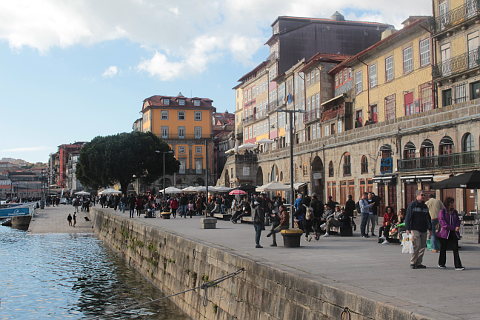 On the other side of the river you can see the pretty buildings of the city of Vila Nova da Gaia stretching up the hillside and easy to visit by walking across the Ponte de Dom Luis bridge which dominates the river scenery and offers great views over both of the cities as you cross.

The Ponte de D. Luis I bridge is an iconic metal bridge with a huge arch and a lower and upper passage. When it was built in the late 19th century it was the longest of its type in the world. It was designed by Teophile Seyrig, a student of Gustave Eiffel (designer of the Eiffel tower in Paris). They worked together on the design originally though had a falling out!  Porto in fact, along with Gaia, has six bridges, the most of any city in Europe and it is known as the 'City of Bridges'.

As well as for the great views of Porto from the other side of the river you will want to cross the river as all the port cellars are over in Gaia and interesting to visit.

Walking along the river edge away from the bridge leads to one of Porto's most impressive sites. This is the lavish church of San Fransisco, the Igreja Sao Francisco. From the outside, it looks like any of the other Gothic churches built in the 14th century. However, upon entering, a very different atmosphere exists. Its extraordinary Baroque interior is covered in gilt carvings of plants, animals, saints and cherubs. The 'Tree of  Jesse' altarpiece is quite mafnificent! The few things not covered with gold, such as the arches, are made from marble.

There is a fee to enter the church but it is worth it and included in the price is a visit to the catacombs underneath the church.

Next to the San Fransisco church is another of the highlights of Porto, the Palacio da Bolsa. This was built in the 1840s when Porto was a thriving commercial town and the Stock Exchange Palace was built to impress its trading partners. The exterior neo-classical facade is understated but the interior is splendid, especially the Arab room which was inspired by the Alhambra Palace in Granada.

If you are in Porto for more than a couple of days you could catch the tram from here and head for Foz at the mouth of the River Duomo.

Moving away from the river the lovely streets of the old town offer lots of interesting shops to discover. The big brand name shops are on the Rua Santa Catarina to the north of here and in this area the shops are more individual and include lots of bars and cafes and lots of shops selling the famous port of the area and lovely delicatessen filled with meats and cheese. Plus there are lots of bakeries selling the lovely Pastel de Nata patisseries that are so famous in Portugal and so tasty.

As you move north you soon get to the Praca do Municipo between the two grandiose avenues, the Avenida dos Aliados lined with magnificent buildings and at the north end sits the beautiful town hall with its central clock tower that is 70 meters high. 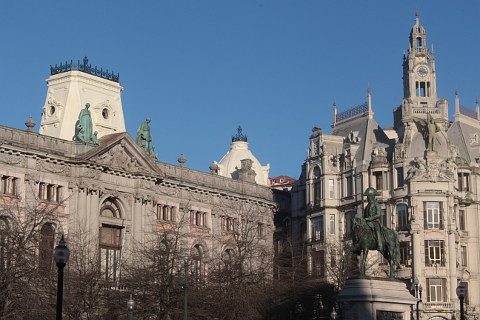 The architecture of the buildings on the Avenue is remarkable and is decorated beautifully with domes, spires, statues, columns and clock towers. The A Nacional insurance company building was designed by Marques da Silva, a Portugese architect who designed many of the iconic buildings of Porto.

Near the bottom of the Avendida is a large art deco building which is home to a McDonalds. Both the interior and the exterior have been preserved and this is said to be the "most beautiful McDonalds in the world"!

At the foot of the Avendidas is the Praca da Liberdade and on the bottom of this is a large 18th century building with a Neoclassical facade. This was once a convent and is now home to a luxury 5 star hotel, the InterContinental Porto.

Near to here is Porto's train station, the S. Bento train station, whose interior is decorated in huge pictures made of Porto's famous blue tiles depicting scenes from Portugal's history. 20 000 azulejo tiles were used to make these magnificent friezes. The train station is another of the buildings that was designed by José Marques de Silva. The style is influenced by the French Beaux-Arts architecture.

Near to the train station is the Sé Cathedral. This church is known for its fortress-like construction. This church was built in the 12th century, but has been altered over time. The only part of the original façade is a rose window. The Gothic cloisters of the cathedral are decorated with blue and white tiles.

West of the Avendida dos Aliados is another interesting neighbourhood centred around the university. Here you will find one of Porto's most visible structures, the Clerigos Tower. It was the tallest building in Portugal when completed in 1763, and because of this ships used it to guide them when they were coming to the Cais da Riberia. You can walk up the 230 steps and admire the all round views from here. 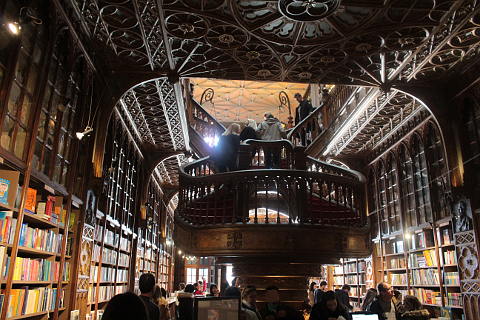 Another of Porto's famous landmarks is just nearby. This is the beautiful Livraria Lello bookshop which is arguably the "worlds most beautiful bookshop". It is also said to be an inspiration for JK Rowling's Harry Potter books as JK Rowling visited often when she was writing her first book as she was working as an English teacher in Porto at the time.

Harry Potter fans will also want to visit the Café Majestic on Rua Santa Catarina as this lovely Belle Epoque cafe is said to be where JK Rowling finished her first draft of 'Harry Potter and the Philosophe's Stone'. It's a great place for a coffee and a Pastel de nata cake whether you are a Harry Potter fan or not!

A little further west of here and you will come to the Museu Nacional Soares dos Reis which is one of the best museums in Porto. A little out of town the Museu de Arte Contemporanea de Serallves is also excellent. Further west of the Soares dos Reis museum are  the “Jardins Do Palacio De Cristal”, considered the most beautiful garden in the city. It overlooks the Douro River. A domed pavilion, built in 1956, gives the city an area for concerts and sports events. It is surrounded by numerous and varied flowerbeds, a lake, and even peacocks.

Over to the east of the Avendida dos Aliados there is not only the Rua Santa Catarina which is the main shopping street and also the location of the Majestic Café but it is also home to the Capela das Almas which is quite covered in blue tiles, and the Igreja Sto Ildefonso which is another church covered in lots of blue tile and is also the area where you can find the market hall, the Mercado do Bolhao though at the moment this is closed for extensive renovation (Jan 2019).

A couple of Metro stops from the centre is a modern architectural site, the Casa Da Musica, which opened in 2005. It is a twelve story high, irregularly shaped building, used for musical performances. Inside the auditorium is a baroque organ that is pinned to the wall, making this building even more intriguing. It is possible to tour the building even if you are not going to a concert.

As well as the 'Pastel de nato' pastries which are a portugese custard tart Porto is famous for its 'Francesinha' which is a sandwich filled with layers of various meats, covered in melted cheese and then covered in a special sauce made of beer. It can be found in lots of cafés but make sure you turn up hungry! For dinner try the famous 'Gomes de Sa Bacalhau', a dish made of cod which comes from Porto though is served throughout Portugal.

Places to visit nearby

A visit to the city of Vila Nova da Gaia on the other side of the Dom Luis bridge is a must to visit and be sure to visit at least one of the many port cellars that are all along the river edge. This is where the port wine is stored and aged.

To see Porto you need two days, longer if you are going to visit some museums. However there are a few easy day trips you could do from Porto if you were to extend your trip. We recommend the day trips to Guimaraes, to Aveiro, to Braga and to the beach at Vila do Conde as well as a boat cruise of the Douro river.

Map of Porto and places to visit

See more places nearby in the Norte guide