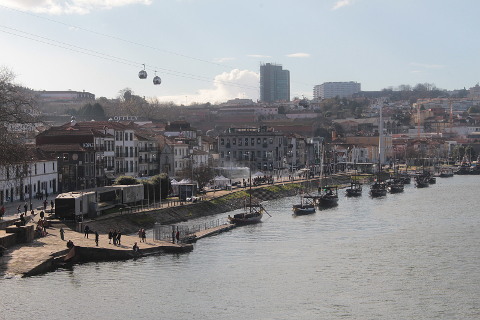 Vila Nova de Gaia is a charming riverside city which sits on the opposite bank of the River Douro to Porto, one of Portugal's lovelies cities. As it is an easy walk across the Dom Louis bridge and Porto is such a popular destination now Gaia gets lots of visitors keen to explore its lovely riverside area and sample its famous Port wine.

The attractive riverside setting of Gaia with stunning views across to Porto makes this an integal part of city breaks to Port. Cross the Dom Louis bridge which offers stunning views of both Porto and Gaia and wander along the charming riverside streets of Gaia.

You will quickly realise that Port wine is a key attraction for visitors. All along the river front and up the hill behind are the cellars of the Port producers. As Port is a protected name it can only come from the Douro valley  and so literally all of the Port producers can be found here. 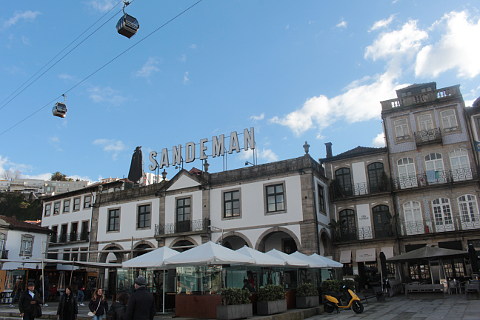 Port production began in the 17th century when British merchants mixed wine with brandy to produce Port. The drink exploded in popularity as an after-dinner 'digestif' and Port producers built large lodges in Gaia for their cellars for blending and storing the port made from grapes grown along the Douro valley.

Despite its name all Port comes from Vila Nova de Gaia rather than Porto. This was partly for merchants to avoid taxes in Porto in the 13th century but it is also because it was easily possible for the Port producers to access spring water in the hills of Gaia and being on the north side with milder temperatures and sheltered from the winds made conditions for storing the port wine preferable on this side of the river.

These cellars are open to visitors and are now a thriving tourist attraction in Vila Nova de Gaia. Sadly whilst I believe these tours were once free and producers hoped to profit by visitors buying a bottle or two at the end of the tour the visits now usually cost around 10-13 euros with Taylor's which is one of the most recommended charging 15 euros and a small Portugese producer, Porto Augusto at the other end of the scale charging 5 euros.

Sandeman, Porto Cruz, Vasconcellos and Ramos Pinto are some of the big producers whose cellars can be found along ther river front.

The river edge is very pretty with traditional boats advertising the different port cellars and also a line of flags displaying the names of the producers. 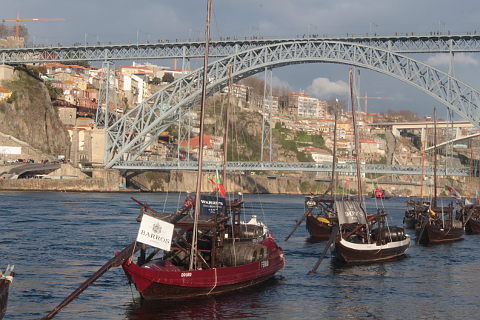 The pretty buildings of the river edge make this area a treat for walking or to stop for lunch or a drink and of course the wonderful views of Porto on the other side of the river are a bonus. Once you have explored the river edge you can wander uphill to explore the quiet streets behind and find some more of the Port Cellars such as Taylor's, Croft and Cockburns.

If you want to walk back over the Pont Louis bridge at the top level (there is a lower level if you are not keen on heights) you can either walk up or take the 'Teleférico de Gaia'. This cable car runs from the river edge up to top level of the bridge and the Jardim do Morro.

The Jardim do Morro is a pleasant spot with a lake and palm trees and lots of grass to spread out on. It is popular for the views it has over the river. Up above the Jardim do Morro is the Mosteiro da Serra do Pilar which is a 17th century monastery and with a circular cloister and views from its cupola down on to the Dom Luis bridge.

There are 6 bridges in total between Porto and Vila Nova de Gaia which means they have the most of any European city. The iconic Dom Luis bridge was designed by Teophile Seyrig, a former student of Gustav Eiffel. Indeed the two worked together on the bridge to begin with but had a disagreement over the design.

Places to visit nearby

Of course you will want to visit Porto on the other side of the bridge with its lovely Ribeira district and San Fransisco church. Harry Potter fans will want to go to its wonderful bookshop the Livraria Lello which is probably the most beautiful in the world and is thought to have been an inspiration in JK Rowlings 'Harry Potter and the Philosopher's Stone'.

No trip to the port cellars of Gaia would be complete without a river cruise down the beautiful Douro valley to see some of the vineyards producing the grapes for the port.

Map of Vila Nova de Gaia and places to visit

See more places nearby in the Norte guide