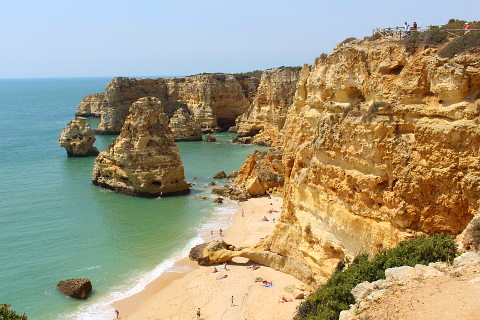 The Algarve region of Portugal is in the southern portion of that country’s mainland. It is undoubtedly the most popular region in Portugal for tourists in large part to the magnificent coastline and ideal year-round climate.

Algarve region - a guide and places to visit

Many of the present day resorts in the Algarve were small fishing villages in the past, and some of the architecture still reflects the earlier times of the area, with narrow streets and ancient churches.

The province is well known because of its abundance of almond trees, as well as others such as lemons, oranges and figs, to name a few. These are grown in the inland area of the province, also known as the “Garden of Portugal”. In today’s world, golf courses have become as popular as the fruit trees at several resorts.

The coast is made up of long stretches of beautiful sandy beaches, interrupted only by jagged red cliffs and cozy grottoes. The northern part of the Algarve is vividly colored with orange groves and fig and almond trees. The mountain ranges of Espinhaco de Cao and Monchique protect the coastline from strong winds.

Enjoy the Beaches and History of Lagos

While the Algarve is famous for its beaches, Lagos may have some of the best in the area. Many are wide and deep with the ocean stretching for miles in front and others are more intimate, tucked snugly against the cliffs between giant rocks. Here is an example of some of Lagos’ great beaches.

The beach named Meia Praia is two and one-half miles wide, making it ideal for water sports. It offers plenty of facilities that rent just the right equipment. Get a little taste of history by walking out on the isthmus of Alvor to see the fort from which the bay was defended during the 17th and 18th centuries.

For a smaller, more intimate beach experience try Batata, Estudantes, Homers, Dona Ana, Camilo, or Pinhao. They are all set against the cliffs and include some interesting rock formations. These beaches can get crowded later in the day, but if you get their early enough you can enjoy the clear, peaceful waters with a bit more privacy.

A series of pathways along the cliffs connect many of the beaches to each other and also give you some amazing views of the Atlantic Ocean.

Mix a little history and old architecture in with your visit to Lagos. Not far from the beaches you will find several churches surrounded by a 5th century wall. Churches like Sao Sebastiao and Santa Maria of Misericorida were built in the 1500s to the 1800s.

Popular Resorts and Beaches on the Algarve

As well as Lagos the other most popular resorts on the Algarve are Albufeira which is very busy and attracts lots of British tourists but its old town retains its Portuguese vibe.

A short distance to the east is the purpose built tourist complex of Vilamoura which is the largest in Portugal. At its centre is a very nice marina surrounded by restaurants of every type and there are also some very good golf courses here.

Further to the east of Faro Tavira is a very popular destination and has some lovely beaches nearby.

Our favourite beaches on the Algarve was the Praia da Marinha which is simply gorgeous and is the iconic beach you see on many of the posters for Portugal. It is close to Albufeira and Lagoa. Nearby is the superb Benagil cave which is big encough to contain a small beach and can be visited on a boat trip that takes you in and around 20 caves on this beautiful stretch of the Algarve.

The Dona Ana beach at Lagos is another favourite and the Ponta de Piedade area is stunning and merits one of the many boat trips you can organise at Lagos.

Tavira and Island Hopping in the Ria Formosa

Just like Lagos, Tavira is most famous for its beaches. It is also like Lagos in that it is one of the most attractive towns architecturally in the Algarve.

Most of these beaches are located on the many islands that surround the Ria Formasa, a large lagoon directly off of Tavira. The main beach is on the island of Ilha de Tavira and it can be reached either by ferry from Tavira or by a leisurely, scenic stroll along a footbridge from the island of Santa Luzia. This is the best beach for water sports. The small beach called Cabanas, reachable by boat only, is more isolated and intimate.

The little islands of Ria Formosa provide plenty of reasons to visit. Santa Luzia is famous for its many restaurants that serve traditional Portuguese food. Luz de Tavira has examples of the most unusual architecture in the area, much of which is considered to be works of art. Other scenic highlights of the Algarve include the almond and orange groves near the village of Santa Catarina da Fonte do Bispo.

Places Less Traveled in the Algarve

Although the south coast of the Algarve has the most popular beaches the rather wilder west coast also has some notable beaches. One of our favourites is the Praia de Amoreira near Aljezur.

While most visitors to the Algarve are there for the beaches, there are other provincial towns that offer different aspects of Portugal. Faro is a Portuguese capital and has many attractions like the old walled town with its buildings that date back three, four, and five hundred years. Lagoa is a fishing village known most for having the most productive winery in the Algarve.

Silves is a lovely village inland of Lagoa and has a wonderful castle dominating the village.

The mountains in the Algarve feature Alpine like pastures at the top. These hills are thickly wooded with eucalyptus trees and are pleasant respite during the hotter months.

Map of Algarve and places to visit