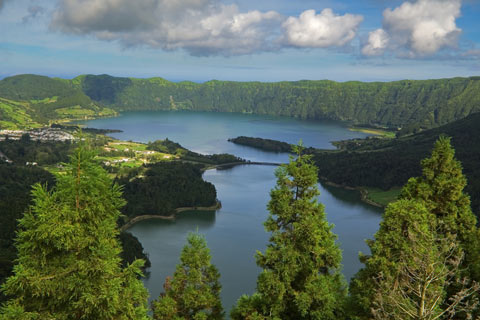 This group of volcanic islands have rugged landscapes and dark sandy beaches. Popular with whale watchers and for activity holidays. An underground lake on Graciosa island is a UNESCO World Heritage Site

Situated between North America and Portugal, in the middle of the Atlantic Ocean, lie the nine islands that make up the Azores Islands. Portuguese explorers first discovered the islands in the early 1400’s, and they are still a part Portugal today. The Islands are about 950 miles away from Lisbon, the capital of Portugal.

There are nine main islands in the Azores, but they are very different from one another. For governmental purposes, they have been divided into three groups- the Eastern, the Central, and the Western Groups.

The Central Group is the largest group of the Azores and consists of Faial Island, Pico Island, Sao Jorge Island, Graciosa Island, and Terciera Island. Faial Island has had the most recent eruption of its volcano, which took place in 1957. This Island is known for its popular marina, visited by sailors from around the world. The capital of Faial, Horta, is very modern, and the town even has wireless internet.

The next island in the group is Pico Island. This Island has the tallest “mountain” in Portugal, although in reality it is a volcano. Pico Island is widely known for its many vineyards and the red wine produced here.

In addition, the Island is popular for its whale watching excursions. Sao Jorge Island is a long, narrow island. It is home to rugged cliffs, which give way to deep ravines. There is also abundant vegetation on this Island. Those who live here live in flats, called fajas, at the seaside. It is difficult to access these flats due to the harsh terrain.

Next is Graciosa Island, which is the second smallest Island, as well as the Island with the lowest elevation. Its most popular site is its Caldeira (the crater of the volcano). However, the only way to reach this site is to go through a tunnel, which ends in the crater. This tunnel opens into a forested area, complete with an expansive underground lake, which has been designated a World Heritage Site.

The last island in the Central Group is Terceira Island. This island is considered the most modern of the nine islands. Many feel that this is due to the influence of a US Airbase housed on the island. Terceira Island is another one of the islands that has underground caves as well as an underground lake.

The Eastern Group of the Azores Islands includes the Islands of Sao Miguel, Santa Maria, and the Formigas Islets (islands too small to show on a map, and used as nature reserves, although there are no plants or animals on them-only birds and aquatic animals).

Sao Miguel Island, also known as the Green Island, is the largest of the Azores as well as the most populated. It has many coastal villages as well as beaches. There are numerous enjoyable activities to take part in on this Island, including sailing, whale watching, hiking and horseback riding to name a few. The largest city on this island is Ponta Delgada, which is the capital of the Azores Islands.

The last of the nine islands is Santa Maria, which is the closest of the islands to Europe. This Island has the warmest weather of the nine, as well as the best beaches of all the islands. Praia Formosa, one of the beaches on this island, is a narrow beach situated on a bay, well known for the “Mare de Agosto”, a festival celebrated with musicians from around the world.

As can be seen, the Azores Islands of Portugal each have their own character. It is as if one can travel from the time when the Islands first formed, as on the more rugged islands, to the present day, such as on Terceira Island, which houses the US Airbase. When looking at the Azores Islands an ordinary map, the small shapes one sees do not seem like much, but with their unique attributes, a visit to these islands can be the perfect destination for any traveler.

Map of Azores and places to visit